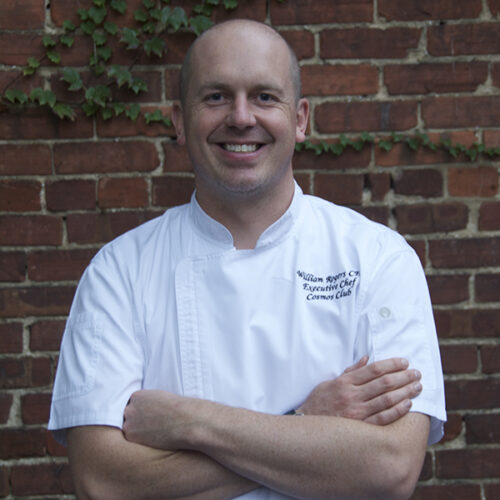 Originally from New Freedom, Pa., William Rogers, CEC, CCA, spent his childhood on the docks up and down the Chesapeake Bay, boating with his family.

Upon graduating from the Culinary Institute of America (CIA), Rogers began his career at the Ritz-Carlton Hotel Company. For the next decade, he worked under two Certified Master Chefs (CMC), Master French Chef (MOF) and a three-star Michelin Chef.

From 2012 to 2015, Rogers volunteered as Restaurant Chef for the Augusta National Golf Club, famous for the annual Masters Golf Tournament. Rogers led a team of chefs that produced gourmet meals for the club’s members during the PGA’s major championship.

Since 2015, Rogers has been the Executive Chef at the prestigious Cosmos Club in Washington, DC. Cosmos Club is recognized as a Platinum Club of America, ranked in the top 10 of all city clubs in the country.