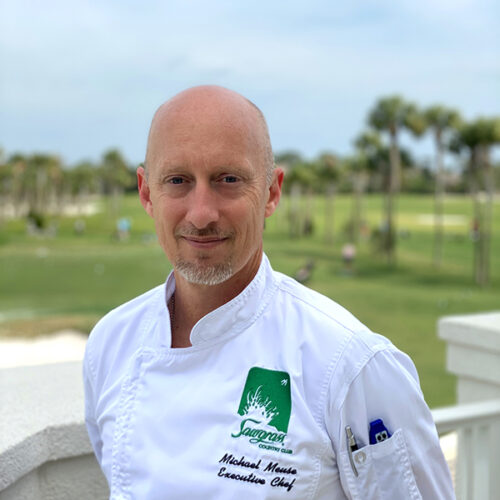 A native of Ponte Vedra Beach, Fla., Michael Meuse’s culinary career began early on, inspired by local country club chefs and their love and respect for quality and tradition. His passion led him to attend culinary school at Johnson & Wales University in Miami, Fla. During his time in the culinary program, Meuse was exposed to a beautifully diverse culture of food, apprenticed with renowned South Florida chefs, worked full time as Chef de Cuisine and graduated from Johnson and Wales with Honors.

Upon graduation, Meuse worked for Hilton hotels, broadening and elevating his culinary craft. His hard work ethic and determination led to a promotion to Executive Chef. With cultural food diversity within his grasp, he quickly expanded his passion and knowledge of food. Meuse grew and refined his culinary team with his creative menus and implementation.

Meuse was recruited to the prestigious and beautiful Boca Lago Country Club in Boca Raton, Fla., where he developed innovative menus, elevated preparation and provided consistent execution. His in-depth knowledge of the food industry and commitment to the members helped create menus that surpassed members’ expectations.

The opportunity to work closely with club members ignited a new-found passion. Meuse found great joy in sharing his talents and engaging with the members. His experience at Boca Lago Country Club made a lasting impact on his career.

Following his success at Boca Lago Country Club, Meuse returned to the Hilton Hotel Company. He trained and developed his culinary team for a recently renovated Hilton Hotel in the heart of Miami. As the Executive Chef, he applied his ingenious menu designs, implementation and grew his team. Meuse participated in many off-site events celebrating the unique food and beverage department of the hotel.

In 2014, he participated in the Brewery Ommegang’s Hop Chef competition at the Biltmore Hotel Miami Coral Gables—a national competition where chefs are challenged to pair their culinary creations with Ommegang’s beers. Meuse artfully paired Ommegang’s Rare Vos Amber Ale with his “Wings over Mi-Hami,” a Rare Vos Braised “Pig Wing” with Goat Cheese Flan, Pork Chicharon Chorizo Crumble and Rare Vos Blackberry Gastrique. Meuse was crowned as the People’s Choice Winner. Meuse would go on to participate in other events, including Heart of a Chef, Iron Fork Miami, Wynwood Walls Miami Craft Beer & Food event, Veritage Miami Wine and Food Event, and Puttin on the Ritz & Taste of Gainesville.

Prior to joining Sawgrass Country Club, Meuse was the Executive Chef at the Hilton in Gainesville, Ga. It has been his dream to return to the private club industry and his hometown in Ponte Vedra Beach, Fla. He has a personal commitment to refining his craft, staying innovative, providing consistent execution and sharing his passion for the culinary arts with the members of Sawgrass Country Club.

All Sessions by Michael Meuse